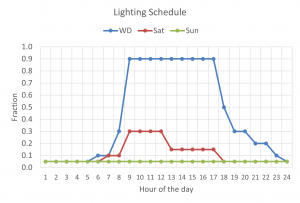 Internal loads refer to features in a building that generate heat (or act as heat sinks). These may come from occupants (people), lighting, or equipment ("plug loads"). In the case of lighting and plug loads, these loads also consume energy. Accurate inputs of the internal loads will lead to better estimation of end-use energy consumption, and loads that must be offset by heating and cooling (HVAC) equipment.

The input process to define internal loads are typically in the form of peak values, such as installed lighting power, and fractional schedules that represent the fraction of that peak that occurs at each timestep. In other words, the peak is when all the lights are on, all equipment running, and the space is fully occupied. The schedules represent hour-by-hour changes, such as turning off some lights or people leaving for lunch. Note that weekday and weekend schedules will often differ significantly in many building types.

The following are common inputs related to internal heat gains. 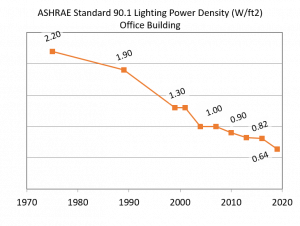 Evolution of ASHRAE Standard 90.1 Lighting Power Allowance for an Office Building from 1975 to 2019

Things to keep in mind when choosing internal loads inputs:

At any stage of energy model development, some assumptions are needed about likely space usage, internal heat gains and infiltration. At the simple box modeling stage, many of these assumptions will require educated guesses, and this section provides some guidance on choosing appropriate values for occupant density, lighting power, plug load power and other potential sources of internal heat gain.

There are several potential sources of information for model inputs. Simulation software often provides default values, which may depend on building type. When defaults are used, the values should be recorded and provided to the design team for review. Energy codes are also a common source for lighting power inputs; the lighting power density allowance for the relevant building type can be a good choice if the lighting system has not yet been designed. Other reference sources also provide typical values for internal gain inputs and are discussed below.

When one of the goals of the simple box modeling exercise is to estimate EUI or energy performance compared to a benchmark, then extra attention to internal load inputs is warranted, because lighting, plug loads and other process loads are often a big part of the total energy consumption. On the other hand, if the goal is to compare relative performance of design alternatives, then using default values for internal loads may be a reasonable choice.

As noted above, there are a number of sources that provide information about internal loads that can be used to verify or replace simulation software default inputs.