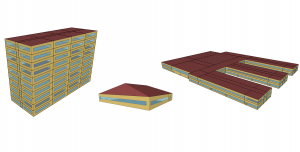 Prototype models are pre-built energy models that are meant to represent a building of a specific type and location. They are meant to represent a portion of the overall building stock, and therefore their input parameters are fairly generic; typically, they are defined to be code-minimum buildings of a particular code vintage, or their inputs may be based on data from building stock surveys (e.g. CBECS at the national level or CEUS in California).

As part of DOE's support of ANSI/ASHRAE/IES Standard 90.1 and IECC, researchers at Pacific Northwest National Laboratory (PNNL) apply a suite of prototype buildings covering 75% of the commercial building floor area in the United States for new construction, including both commercial buildings and mid- to high-rise residential buildings, and across all U.S. climate zones. These prototype buildings–derived from DOE's Commercial Reference Building Models–cover all Reference Building types (with the exception of supermarkets), and also an additional prototype representing high-rise apartment buildings. As Standard 90.1 and IECC evolve, PNNL makes modifications to the commercial prototype building models, with extensive input from ASHRAE 90.1 Standing Standards Project Committee members and other building industry experts.[1]