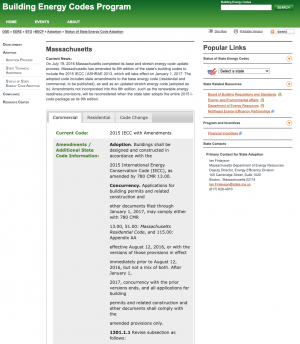 To determine the applicable energy code for your project, please visit the U.S Department of Energy's website for its Building Energy Codes Program. On this page, you can select the state in which your project is located, and it will tell you which energy code applies, along with any amendments adopted by the state.

Energy modeling for demonstrating code compliance is often one of the main drivers for using BEM on a project, along with (hopefully) using it to inform energy efficient design decisions. Performing the code modeling is covered in other sections of this site, but there are some key elements of the code that should be understood in the early stages of the project.

Energy codes in the United States and many other countries typically have two (or more) compliance paths: a prescriptive path, and a performance path.

The prescriptive path can be thought of as a checklist of efficiency requirements for individual components of the building - meet all of the requirements, and the building will comply. For example, there may be lookup tables in the code that dictate how much insulation must be installed in the walls and roofs, thermal properties of windows, allowed lighting power in different types of spaces in the building, and HVAC system requirements.

The performance path, instead of requiring efficiency levels for individual components, is focused on achieving whole-building efficiency. It allows for trade-offs to be made between efficiency of components as long as the whole-building efficiency target is met, as demonstrated by energy modeling analysis. This can often be advantageous for larger, complex building designs that cannot meet a specific prescriptive requirement - for example large office buildings with lots of windows that exceed the prescriptive limit (prescriptive codes often limit the window-to-wall ratio at 40%). In this example, the building could exceed the prescriptive window-to-wall ratio by installing more efficient lighting, HVAC systems, or other efficiency upgrades elsewhere in the building. There are different sets of rules for the performance path depending on the code in effect, as discussed below.

Modeling Rules for the Performance Path

The performance path requires you to develop an energy model that represents the building you are designing (the proposed design model). This model is compared to a second model that is created according to a set of rules (the baseline model, or the standard design model) that sets a "budget" for how much energy is allowed to be used by the proposed design. If the proposed design uses less energy than the budget set by the baseline model, then the building complies with the performance path. Depending on the code in effect at the project's location, different rules may be used to set the budget. These are discussed briefly below. More details will be discussed in pages related to later stages of design.

During the early project stages, the important thing to do is to identify which rules are in effect and begin to familiarize yourself with the requirements.

Before the 2016 version of ASHRAE 90.1, the ECB approach was the method for demonstrating code compliance with the performance path. Starting in 2016, the Performance Rating Method can also be used for code compliance, if allowed by the jurisdiction where the project is located.

ASHRAE provides the following description of the ECB approach (italics added for emphasis):

Section 11 of Standard 90.1 describes the ECB Method, an alternative approach to demonstrating compliance of a building design with Standard 90.1. Compliance with Section 11 is described in detail in Section 11.1.4 of the standard.

(Note: The energy cost budget and the design energy cost calculations are applicable only for determining compliance with ANSI/ASHRAE/IES Standard 90.1-2010. They are not predictions of actual energy consumption or costs of the proposed design after construction. Actual experience will differ from these calculations due to variations such as occupancy, building operation and maintenance, weather, energy use not covered by this standard, changes in energy rates between design of the building and occupancy, and precision of the calculation tool.)[1]

Note that the metric is energy cost for the ECB approach.

The PRM is also commonly referred to as "Appendix G" due to its location in the Standard. Starting with the 2016 version of 90.1, the PRM may be adopted for use with code compliance. Previous versions of 90.1 only allowed the PRM to be used for beyond-code analysis for green building certification programs such as LEED.

The US DOE's energy codes site offers this description of the 2016 (and later versions of the) PRM:

Appendix G uses a more independent baseline [than the ECB approach] where many of the characteristics of the baseline design are based on standard practice, meaning credit is available not only for exceeding prescriptive requirements in the code, but also for exceeding standard practice that is not regulated by the code. For example, in Appendix G credit is available for strategies not credited in ECB such as optimized window area and orientation, selection of more efficient HVAC and service water heating equipment type, right sizing HVAC equipment, efficient use of thermal mass, etc. Appendix G uses a stable baseline approach with efficiency levels set at values that are not intended to be updated with each new addition of the code. Instead, the proposed building energy performance needs to exceed that of the baseline by an amount commensurate with the code year being evaluated.[2]

Similar to the ECB approach, energy cost is the metric for the PRM. Prior to 2016, the baseline model would set a cost budget that must not be exceeded by the proposed design. Starting with 2016, a new metric called Performance Cost Index (PCI) was introduced. PCI is the ratio of proposed energy cost to baseline energy cost. Different PCI targets are set based on building type and location (climate zone).

California's performance path is defined by the ACM. The ACM describes the modeling rules, and also detailed software requirements that must be met for software to be allowed for use with the Title 24 performance path. It is similar to pre-2016 PRM, however the efficiency levels applied to the baseline building (called the "Standard Design" in the ACM) are based on values in the Title 24 standards.

The metric for Title 24 compliance is called Time Dependent Valued (TDV) energy. TDV is a code compliance metric "meant to incorporate the societal and environmental impacts into the cost of energy during a given hour of the year. This includes higher greenhouse gas emission rates and actual cost of electricity from peaker plants during high energy demand on the hottest days of the year."[3]